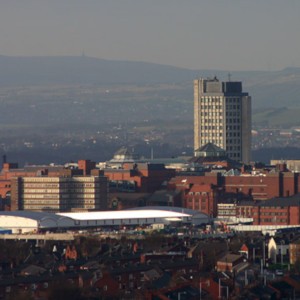 These are some testimonials of pupils who have passed their Driving Test with us in Oldham.

Vanessa had lessons in Oldham with Instructor Pauline

My mum had Automatic lessons with Pauline and when she passed her test I started my manual lessons with her. I had already had a few lessons when I first turned 17 however didn't get on with my Instructor so I stopped them.

My first lesson with Pauline was so relaxed I felt as though I had known her before and my mum had told her alot about me so I suppose it made it easier when we met also. I took my theory and eventually passed it!! ( in fact it felt as though I was on first name terms with the people in the test centre it took me that many times to pass it).

My mum and dad got me a car for my 18th and my dad took me out in between lessons and now after passing my test I am now an Independent driver and looking forward to my motorway lessons with Pauline.

Abu had Lessons in Oldham with Instructor Pauline

I was recommended to Pauline from my cousin, so I gave her a call and started my lessons.

It took me a while to do my lessons and pass my test as I had to go back home for a short time so I kept stop,starting my lessons eventually I managed to do my test and passed it. I would like to thank Pauline for her patience and understanding.

I had already tried manual lessons in the past, however didn´t like it because I felt as though I had too much to contend with. I phoned Mitchell´s for one of their Intensive courses. I passed my test with Pauline, however she didn´t start me off with the lessons as she was too busy, so I had lessons with another Instructor who Mitchell´s passed work onto if they were too busy. I paid for 30hrs with my test, however my Instructor who I was with told me I needed more hours, so i got onto Mark and he advised me to try Pauline and see what she thought as I was going out driving with my husband as well at the time and he said I was ready for my test. I went out with Pauline and she assessed my driving and told me to book my test straight away. Pauline showed me how to do a parallel park and showed me how to do a left reverse easy as I was struggling with it. What I would say to anyone who wants driving lessons with Mitchell´s is wait for the Instructor you want as they must be good if they are that busy it´s worth the wait. Thank you Mark for recommending me to Pauline I looked forward to my lessons every Wednesday and she is a good Instructor you are lucky to have her.

Dharmishtha had Automatic Lessons in Oldham

Congratulations to Dharmishtha on passed her test.

I had taken lessons in a manual car and decided I would give Automatic a try with my instructor Pauline.

I wanted to put in for my test before I had my youngest child and unfortunately I was unsuccessful so I waited until after having my son and put in for my test and passed, i am so grateful to Pauline, I couldn't have done it without her.

Rashida had Automatic lessons in Oldham

Congratulations to Rashida on passed her test.

I had been living in America for 8yrs and had an American licence, when I moved back to England I had to apply for a British licence.

I'd passed my theory 2yrs ago however did not take any lessons, unfortunately my theory was about to run out and Paulin advised me to just retake my theory test rather than rush into my driving test just in case I failed it.

I passed my theory again and went in for my driving test and passed with 5 faults. I can't thank Pauline enough for getting me through my tests. I would recommend Mitchells for driving lessons.

Uzma had driving lessons in Oldham

Congratulations to Uzma on passed her test.

I was looking at taking driving lessons and wanted a female Instructor.

I got in touch with Mitchells and I got Pauline as my Instructor.

It took a while for me to get through my lessons and pass both my tests but that was my choice. As much as Pauline kept pushing me to go in for my test I just kept putting it off. Eventually I booked my test and passed it. I think I had just got to know Pauline that well I didn't want to leave her!!.

Congratulations to Natasha on passed her test.

I wanted to take driving lessons, However I was such a nervous pupil, every lesson I would get butterflies in my stomach but once I had started driving i was ok.

Then it came to my test I didn'´t tell anyone I was going in for it as I thought it would make me more nervous, when I passed I was over the moon I really didn't think I would do it and I did. Thank you Pauline I couldn't have done it without you!!

Richard had Driving Lessons in Oldham

Congratulations to Richard on passed his test.

I was looking to take Driving Lessons and wanted to pass fairly quickly because i am a Plasterer and needed to drive to get me around to my jobs.

I was having 2 lessons a week for an hour and half I passed my Theory and when i was ready for my Test Pauline advised me to book it as soon as possible.

I passed and am now Mobile thanks to Pauline as a driving Instructor.

Congratulations to Emma on passed her test.

I had already had lessons previously and never carried them on.

I was sorting some paperwork out and realised that my theory was ready for running out, so after having previous lessons with Pauline I emailed her and she got back to me straight away I booked my test and had a few lessons so that Pauline could correct any faults I was making.
Pauline got me through my test and I would recommend her to anyone wanting to take driving lessons.

Congratulations to Stacey on passed her test.

I hadn't driven for twelve months due to unforeseen circumstances and wanted to retake driving lessons so I rang Mitchells driving school and he put me onto Pauline.

I wanted a couple of lessons a week so that I could get through my Theory and Practical test quickly.

Pauline found the faults what I had, she told me where we were going to drive to and I would just drive there which was better for me as I found it easier to concentrate on what pauline wanted me to do.

I would recommend Pauline as an Instructor as she is patient and understanding.

Shajahan had Driving Lessons in Oldham

Congratulations to Shajahan on passed his test.

I wanted to change Instructors because I had been driving for a while and not learnt how to do a manoeuvre, my friend at college was telling me about where he was up to with Pauline and in such a short space of time so I got Paulines number off him and gave her a ring within a space of three months I had done all my manoeuvres and done a few mock tests with Pauline and passed them.

Then I put in for my test and passed first time.

I would recommend Pauline as a Driving Instructor and Mitchells Som.

Dennis had Driving Lessons in Oldham

Congratulations to Dennis on passed his test.

I'd already had driving lessons previous and took my test but failed on silly things.

I was driving around in my own car with my best mate and picked up a few bad habits. I wanted to go with a driving school, thats when I found Mitchells on the internet.

I rang Mitchells and they put me onto Pauline for the Intensive Courses.

When I met Pauline I got on straight away with her as she is very patient and friendly. She found my faults straight away and corrected them. We did a trial run of the test TRYING to be silent for 40mins but it didnt work because I just made mistake after mistake. Pauline just worked through these until I got them right. It felt great to finally pass my driving test.

I would recommend Pauline for driving lessons in Oldham.